We are very sorry to report the sad news that Eileen Nash passed away recently. Eileen was a great supporter and volunteer at the Elisabeth Curtis Centre as well as taking on the roles of Beds. County Chairman and County Coach and Coach Developer.  She worked tirelessly in the Region and was a familiar face at the Regional Qualifiers over many years.

Eileen started volunteering on a Tuesday p.m. at about the time ECC was officially opened. She was a dedicated volunteer under Robert Evens guidance taking over from him when he left.

Eileen organised fundraising pony rides at local fetes and demonstration rides. She was the first to take a rider to the Special Olympics where they were very successful.

Her rider's did well in their Grades and I think one even attained a gold. Eileen subsequently had riders that qualified for the National Championships where they all did very well. One of her riders even went on an RDA holiday in Portugal.

During the many years Eileen has been with the RDA she has served on various committees and has been Chairman as well as treasurer of the Centre and latterly a trustee. She became press correspondent, gave talks on the Centre, County Chair, County Coach, Examiner, Countryside Challenge Judge and Trainee Adviser.

Paul Hooley was the ECC President and worked with Eileen for the good of the ECC. During his year as President of a local Rotary Group he awarded her the high accolade of a Paul Harris Fellowship for her work with the charity.

Eileen will be missed by all - our condolences to her family. 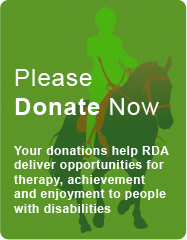